Brewing quality beer requires adherence to a strict distillation process with closely regulated temperature control. Failure to properly cool a brew will result in oxidation damage and an unpleasant aroma due to the formation of dimethyl sulfide (DMS). This can be a particularly frustrating occurrence for a newbie brewer with poor knowledge on how to properly regulate beer temperatures.

Fortunately, there are various cooling systems that can help a beer maker avoid the creation of a poor-quality brew. The most common methods for cooling include:

These pieces of equipment are frequently referred to as “chillers,” in the craft brewing industry. However, they are technically heat exchangers that use chillers for beer fermentation temperature control. For the purpose of this article, we will use “chiller” and “heat exchanger” interchangeably.

Read on to discover the merits and drawbacks of using a counterflow chiller vs. immersion chiller vs. plate chiller in your brewing process.

What Is a Plate Chiller?

A commercial brewery plate chiller is a device that uses metal plates to transfer between the heated wort and cold water.

How to Use a Plate Chiller

A plate wort chiller works on the principle of heat conduction to extract thermal energy from the wort and achieve rapid cooling. The plate chiller has multiple stainless-steel plates welded together which channel hot wort in one direction while cold water flows in the other direction, thus extracting heat from the brew.

Advantages of Utilizing a Plate Chiller

Opting to combine a wort plate chiller setup with brewery chillers offers several advantages which include:

Some of the most significant drawbacks to utilizing a plate worth chiller is the high cost of purchase and accessory fittings (hop strainers, high-temperature pumps, and auxiliary flow connections) and the difficulties encountered in cleaning.

What Is an Immersion Chiller?

An Immersion chiller is a brewery cooling device that utilizes a stainless steel or copper coil to reject heat from hot wort.

How to Use an Immersion Chiller

The operation of an immersion chiller is simple by design. Water from an external closed-loop chiller is continuously pumped through a cooling coil made of either steel or copper which is submerged directly in the brewing vessel.

As the cool water flows through the coil, it absorbs heat from the wort mix and therefore reduces its temperature. This process is continued until satisfactory brew temperatures are achieved.

Advantages of Using an Immersion Chiller

The main benefits of using an immersion chiller to regulate wort temperature are listed below:

Drawbacks of Using a Quality

The main disadvantage of using an immersion chiller is the longer duration of the cooling process which may expose the brew to the retention of tannins and formation of undesirable aromas.

What Is a Counterflow Wort Chiller?

The counterflow chiller setup consists of a set of tubes of different sizes through which the heated wort and cooling water flow in opposite directions to facilitate brew temperature optimization.

How to Use a Counterflow Chiller

Heat elimination using a counterflow chiller is achieved using a series of concentric tubes. A smaller tube made of copper situated within a larger external tube is used to convey the hot wort. The cooled water or water/glycol mix is then channeled through the lumen of the larger tube to run in an opposite direction to the flow of wort and hence cool the brew.

Counterflow chillers perform decently when compared to other types of chiller. Some pros to using these variants of chillers are outlined below.

Despite having significant advantages, counterflow wort chillers have a few drawbacks which include:

For over thirty years, Cold Shot Chillers has been providing the very best industrial chillers suited to various production processes. Our highly motivated and experienced staff are always available to offer advice to help you decide on the brewery glycol chiller option best suited for your unique process needs.

Contact us online today to learn more about how we can help you with your process cooling needs, or to request a quote from a member of our staff! 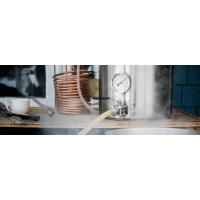 Please fill out the form below. * Required Fields